A Tribute to Karl Wickstrom 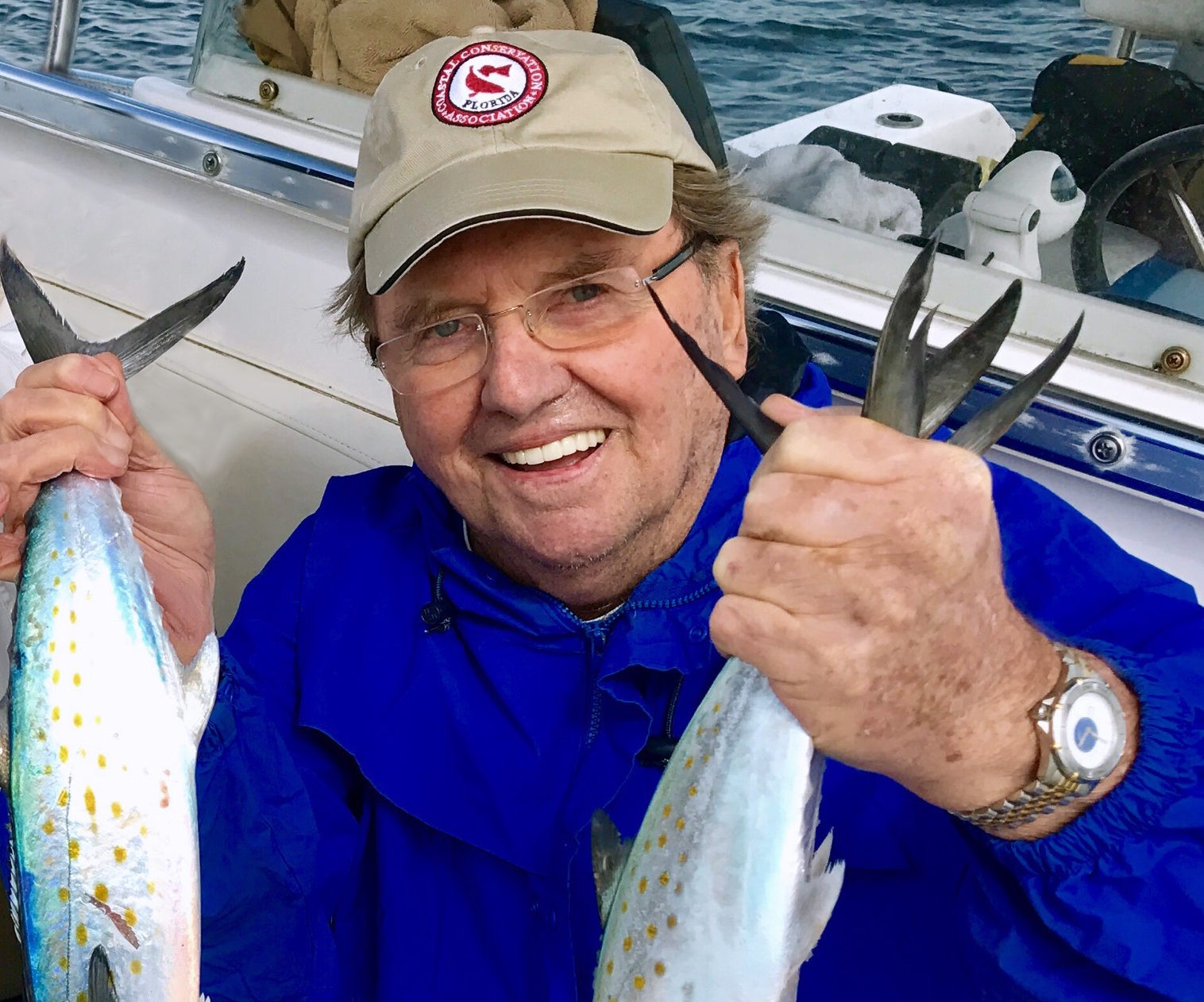 June 26, 2018 – The entire team at CCA Florida, our members and many others in the industry, are mourning the passing of Karl Wickstrom, 82, founder of Florida Sportsman and a life-long advocate for recreational angling. The following tribute is from our friends at Florida Sportsman.

“No individual has done more in the past 50 years for the health of our fisheries than Karl Wickstrom,” said Congressman Charlie Crist(D-FL 13thDistrict) and former Florida governor. “Someone whose journalism informed and created a vibrant community that will continue to defend and expand sustainable fishing practices and the protection of our environment for decades to come.”

Born 1935 in Rock Island, Illinois, Wickstrom earned a journalism degree from the University of Florida at Gainesville and soon after started his career as a sports reporter. In 1960, he moved to Miami to work for the Miami Heraldas an investigative journalist, winning state and national awards for incisive reporting on corruption in public affairs. In 1969, he founded Florida Sportsman(first titled Florida and Tropic Sportsman), engaging Vic Dunaway, at the time a well-known outdoors writer at the Herald, to lead editorial efforts at the new magazine. Florida Sportsmanquickly grew to become the leading source for information on Florida’s developing boating and fishing interests and importantly, the voice of the state’s recreational anglers and hunters on issues of access, management and environmental causes. Florida Sportsmancelebrates its 50thanniversary in 2019.

Through the decades as publisher of Florida Sportsman, Wickstrom fought and won a number of legal changes to benefit Florida marine resources and recreational angling, garnering numerous awards along the way. Wickstrom was co-founder of the Florida Conservation Association in 1984, now Coastal Conservation Association (CCA). He was a benefactor of many other marine resource organizations, including The Florida Oceanographic Society in Stuart, the Rivers Coalition, The Martin County Anglers Club (which named the Wickstrom Reef after him) and a long list of others. His magazine voiced the concerns of recreational interests in countless disputes with fishery managers over allocations and access to waters, often winning decisions in the court of public opinion with his editorials in the magazine.

Wickstrom also worked to achieve gamefish status for redfish, ending commercial sale of the species in the state, and fought ceaselessly for the rights of recreational anglers subject to management policies that often favored commercial fishing interests.

“Karl was a great man and an equally great friend. He gave an incredible amount of energy to Coastal Conservation Association Florida,” said Ted Forsgren, Special Advisor to CCA. “We went through so many battles over the past 35 years that I can hardly list them. Some of the big issues included gamefish status for redfish, blending two agencies into one constitutional fish and wildlife commission and banning fish traps in federal waters. And of course, the constitutional amendment prohibiting the use of gill and entanglement nets, the ‘mother of all fishing wars,’ as one of the commercial fishing lobbyists called it.”

That battle was one of Wickstrom’s biggest victories in the name of marine resources and recreational angling. It came in the early 1990s, when he mounted the Save Our Sealife Initiative to end the destructive use of gillnets in Florida waters. The movement came to be known as the net ban, and Wickstrom and Florida Sportsmanwere key leaders in the campaign to amend Florida’s constitution to ban the nets. In 1994, the constitutional amendment that the campaign put to ballot passed with 72 percent of the vote. In the years following Florida’s fisheries rebounded dramatically.

After the net ban victory, Wickstrom turned much of his attention, and his writing inFlorida Sportsman, to the fight against the environmental disaster of chronic Lake Okeechobee water releases through the St. Lucie River and the Caloosahatchee rivers. For decades he supported the Rivers Coalition and other organizations in that statewide battle for cleaner waters for Florida estuaries and the Everglades.

“In his long history as a writer, editor and conservationist,” said Mark D. Perry, Executive Director, Florida Oceanographic Society, “Karl Wickstrom was a champion for Florida’s waters through several campaigns. Karl fought for our northern estuaries to stop the destructive discharges from Lake Okeechobee and send that water south to the Everglades and Florida Bay. He was a tenacious and effective advocate for our waters and I was honored to fight alongside this incredible champion.”

Wickstrom earned a long list of publishing and conservation awards. In 1995 the American Sportfishing Association named him “1995 Man of the Year” for his work on the gillnet ban. In 1999 he won The Billfish Foundation’s John Rybovich Lifetime Achievement Award. He was inducted into the International Game Fish Association’s (IGFA) Fishing Hall of Fame in 2008.

“Karl Wickstrom has always displayed a fierce will to protect Florida’s waters and its fish populations, taking on everyone from governors to bureaucrats to captains of industry anytime he saw a threat to the future of the resources,” said Frank Sargeant, editor of The Fishing Wire and a regular contributor to Florida Sportsmansince 1970. “I also remember Karl’s quick and incisive wit, and his ability to endlessly have a good time on the water. When the snook were not biting, Karl might propose a ‘who can put the lure closest to the mangroves’ casting contest. That usually resulted in one of us sticking his head in among the incredible clouds of no-see-ums to extract our lure while the other mercilessly drove the boat further into the bushes. It was always fun, even when we came back to the dock bug-bitten and empty-handed.”

In 2015, Karl won CCA Florida’s Ted Forsgren Conservation Award. At the time of that CCA award, presenter Bill Camp, past chair of CCA, said of Karl, “The Net Ban. Water quality. Recreational angler access. Sound resource management. Common sense. Karl Wickstrom has been your voice on these concerns and issues. Our voice. It’s the voice you want on your side. Unyielding. Passionate. Witty. Smart. Totally awesome.”

Wickstrom was also respected and influential in political circles, as well.

“When I first ran for public office 16 years ago,” said Sarah Heard, Martin County Commission officer since 2002, “Karl was the first person I contacted for support. No one in Florida enjoys or deserves more respect and admiration for his conservation credentials than Karl does. In a state notorious for flim flammers and greedy scammers, Karl stands out for his integrity and commitment to the natural resources of our state.”

As lauded as he was publicly for his accomplishments in conservation of wildlife resources, Karl Wickstrom was also well loved by his readers for his emphasis on the value of fishing and hunting in their lives. For nearly 50 years now, the magazine Karl started has spread both of those messages throughout Florida and across the U.S, and the interests of outdoor enthusiasts have been much stronger for his achievements.

“Karl’s work has entertained and inspired generations of readers,” Weakley said. “His legacy continues to shape the very philosophies and systems that govern the conservation and public use of natural resources.”

Read more about Karl and his legacy at www.floridasportsman.com.