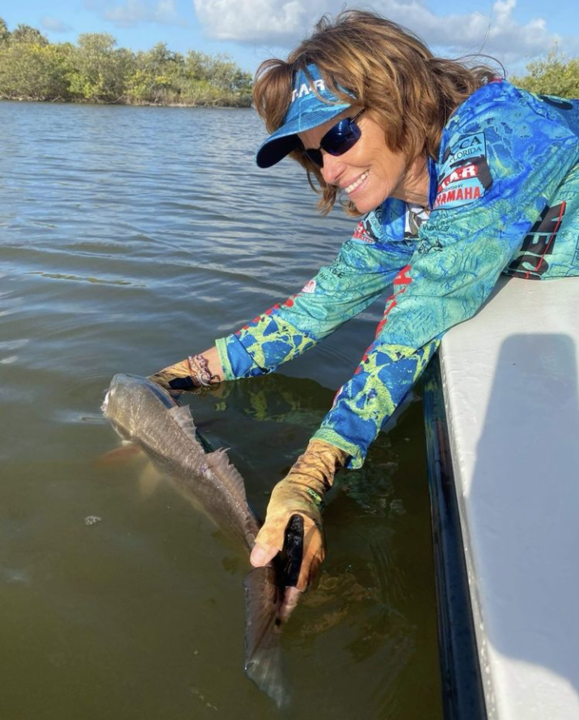 An Angling Athlete will be Recognized for the First Time

For more than three decades, Coastal Conservation Association (CCA) Florida STAR Director Leiza Fitzgerald has been a leader in the fishing industry, trailblazing the sport one species at a time.

To commend her commitment to fishing, the Florida Sports Hall of Fame named Leiza a distinguished honoree in its 2022 class, the first angler to receive this distinction.

The Florida Sports Hall of Fame recognizes Florida’s most iconic athletes, and this year’s 12-member class is one of the most unique, representing more than six sports and adding two new sports, fishing and Special Olympics. The class comprises the best in athletic achievement, community involvement and education efforts of their sport within the state of Florida, and includes a Super Bowl MVP, a Stanley Cup Champion, an Olympic gold-medal coach, a World Series champion, a Guinness Book World Record holder and an all-STAR angler, Leiza.

A champion for conservation, Leiza has spearheaded the CCA Florida STAR competition for eight years, a catch-photo-release event designed to educate the public on the importance of protecting Florida’s marine resources. Her tireless dedication to the competition has helped improve marine habitat and support restocking efforts across the state.

“Leiza is forever our ‘Queen of Conservation,’” CCA Florida Executive Director Brian Gorski said. “From leading the STAR competition to restocking fish and hooking grand slams in between, Leiza’s love for sportfishing and Florida’s fisheries is unmatched. Leiza is more deserving of this award than anyone I know, and the entire CCA Florida family could not more proud.”

Leiza’s passion for fishing spans beyond her profession, a self-proclaimed “top hooker,” she has fished worldwide in freshwater, saltwater, on fly, spinning rod and more. Leiza has won numerous “top 10” fishing titles at events such as the ESPN Redfish Cup and FLW Redfish Tour, as well as numerous regional and local events. Recently, she received recognition as “Top Angler for Redfish” and “Top Angler for Redfish, Snook and Sheepshead” from the International Women’s Fishing Association (IWFA). Leiza’s other accolades include being named one of “The Top 12 Lady Anglers in Florida” by Salt Strong, “Sportsman of the Year” by The Sarasota Sportsman’s Association and one of “The 30 Most Influential Female Anglers in North America” by Wildlife Enthusiast magazine.

Not only is Leiza a competitor, but a creator too, helping establish the World Sailfish Championships and the World Tarpon Championships. She is also a steward for philanthropy, as Leiza and her friends’ fishing team, “Screaming Reels and High Heels,” benefits two important charities, Hooked on Hope and Children’s Pediatric Cancer Foundation.

Off the water, you can often find Leiza with a bow and arrow in hand, as she hunts throughout North America. In addition, she frequently contributes to local and national outdoor publications, radio shows and podcasts, participates in dozens of annual speaking engagements and fishes alongside many of TV’s celebrity anglers.

Leiza has been instrumental in introducing women to the sport of fishing, conservation and the outdoors, and will make history as the first angler to be inducted into the 61st Florida Sports Hall of Fame on Nov. 2 at Raymond James Stadium in Tampa, FL.