Along with Duke Energy and the Florida Fish and Wildlife Conservation Commission, we have released over 34,000 juvenile and adult redfish this year – including 10,000 last week in Port Charlotte – all hatchery-reared and donated by the Duke Energy Mariculture Center in Crystal River, into Florida waters hardest hit by red tide.

In March, at one of several county releases, First Lady Casey DeSantis, Secretary Noah Valenstein of the Department of Environmental Protection and State Representative Bob Rommel joined with CCA to release redfish in Collier County. The releases have continued ever since, with stops along the coast where members, families and local dignitaries joined in to support the recovery of the fishery. In May, 8,000 juvenile redfish were releases in the panhandle, and another 10,000 in Port Charlotte in early August. 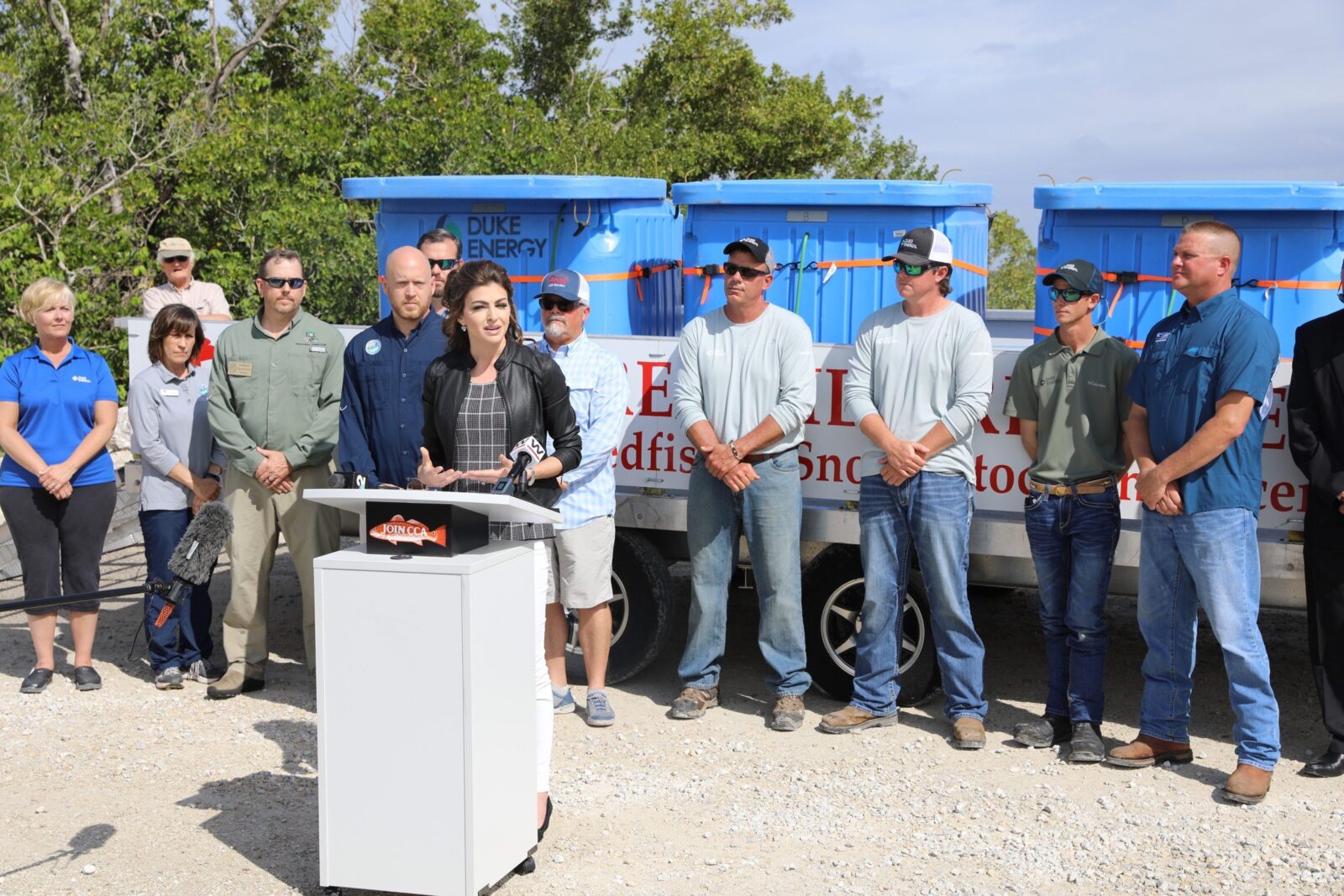 Each of the first eight releases included approximately 2,000 juvenile fish and 25 to 30 adult redfish. Locations were chosen specifically by the Duke Energy Mariculture Center biologists and releases began when waters were determined safe.

The snook initiative included the release of 5,000 juvenile snook, spawned in October 2018 at Mote’s Aquaculture Park in Sarasota.  CCA Florida staff and members joined Mote scientists in April and June to measure, weigh and tag the juvenile snook with Passive Integrated Transponder (PIT) tags. Releases took place in May and June, each consisting of approximately 1,500 fish and into Ainger Creek and Tippecanoe Environmental Park in Charlotte County. Did you Adopt a Snook? Check out the most recent Adopt-a-snook Data May 2020.

The total program cost of over $220,000 is being supported by the renewed Adopt-A-Snook program, allowing anglers and businesses the opportunity to join in the rebuilding efforts.  Donors will receive an adoption certificate including the tag number and release location for their adopted juvenile snook after all releases are completed.  Donors will also receive updates on their fish based on the data collected from the PIT tags.

CCA Florida hopes to conduct similar releases in the future and is constantly working for recreational anglers, fighting for clean water, defending access and supporting fisheries.  Anglers can become engaged by joining CCA Florida at JoinCCA.org.  Or visit us on our Facebook page.